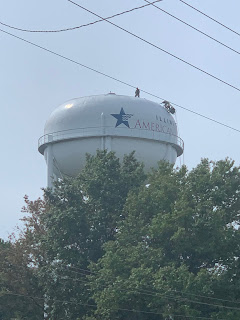 I have broken three bones in my life.  Two of those breaks were not my fault. Sure, I was running through the church chasing a kid while we were firing squirt guns at one another.  And yes, I hit a wet patch on the stairs and my feet shot out from under me.  I did rocket to the bottom landing,  where I lay moaning and dazed.  But that is exactly my point!  The culprit was GRAVITY.  Without gravity I would have caught that little sucker and he would have been so very sorry he messed with me. It is not my fault that four football players and a cheerleader had to carry me home because I couldn't walk or drive.  It turned out to be a broken elbow ... broken by g-r-a-v-i-t-y.  And then there was the time I took that nasty spill while downhill skiing.  Again ... not my fault.  That was the steepest bunny slope I have ever seen. And it was gravity that carried me to the bottom ... on my bottom ... with a busted shoulder.  The fact that I continued skiing for four more hours is a testament to my skill and finesse.

Gravity always wins.  Always. That is the way the world works. Shoot yourself off into space and you will find out you weigh virtually nothing.  And nothing will hold you down. You are free to roam about the universe.  You can swim effortlessly without water through the gravity-less emptiness of space. But even with a broken bone or two I am exceedingly grateful for gravity.  Those guys up there on that water tower across the street from my church this morning had to fight gravity to get up there.  Step after heavy step, they put great effort into climbing that puppy. When they finish their work they can look forward to a much easier descent. Why?  Gravity.  Yes sir.  It will push them right along and they will be surprised how much easier it is to go down that it was to go up.  Gravity keeps us rooted in place. It keeps us from pushing off from the planet and accidentally sky rocketing into the stratosphere and points beyond.  Wouldn't that be a mess?  Without gravity you just might sneeze and rocket yourself skyward without intent.  Home would be just a memory as you looked down at that little receding speck-of-a-planet while gliding effortlessly by Jupiter on the way to the edge of the solar system. Yes, gravity makes sneezing much safer.  Who knew? Ever wonder where you put you car keys? Without gravity it wouldn't matter where you put them.  They could be anywhere.  Literally .. anywhere. Without gravity rain wouldn't fall and you might actually drown from the moisture in the air.  (Okay, I made that up. But it might be true. I want it to be true.) Thank God for gravity!  Wait ... thank God?  God?  You mean gravity was designed by a powerful authoritative creator?  It didn't just happen because the earth spins around?  Well, yes and no.  Gravity is not a direct result of the earth spinning around but ... it affects gravity. Gravity is caused by mass. But before we get so deep into physics we all make a mess of our mass ... ask yourself this little question ... who put the spin on the earth?  Whoever spun the earth created gravity.  They work in sync with one another.   Don't you think?  I mean ... is it easier to believer that gravity just happened?  That the earth just started spinning?  Or is it easier to believe that someone caused it ... designed it ... set it into motion?  I think I know.  But I am not a gravity expert.  I am simply a gravity consumer.  You figure it out.
Posted by Ron at 1:00 PM No comments: 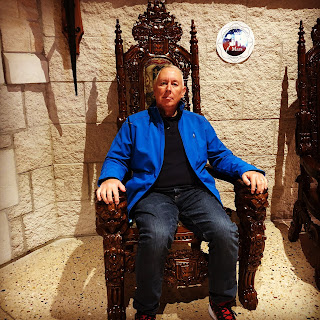 Look at me sitting there all pretty on my throne! Impressive! Right?

My dad used to tell me I could screw up a one car funeral. Dad was really delicate with the way he phrased his thoughts to his young son. But he was also right. I could do that. You don’t want me running the universe. Not unless you want to see a REEEAAALLYYY BIG ACCIDENT!

So it’s not me but someone’s got to be running this show. Come on. Think about it. If you wanted to create the first car would you put a dolphin in charge? Probably not. After you created a car maybe you decided you needed a nationwide network of highways. Would you assign the job to “Mrs. Phyllis’s Preschool” class to design it?  I mean, have you ever seen what preschoolers do with crayons and paper? Unless you’re their mom it’s not pretty. Are you going to put them in charge of the interstate highway system? I used to work at KMart back in my college days. At that point in time we still made signs for the store using rubber letters, red ink, and a roller. Computers were for NASA. One day I was carrying all of those letters … hundreds of them … and as I was going downstairs in the stockroom I tripped (that’s plausible) and tossed all the letters down the stairs. When I got down to the bottom … would you believe it … they fell in just the right order and created the signs for that weeks sales!  That’s amazing!  It’s also a lie! You and I both know that didn’t happen. You would NEVER believe me if I told you that story. You are much too smart for that!

So why are we so quick to believe that this magnificent world just happened. You’ve heard the story. It goes like this …… NOTHING + BOOM + TIME + MORE TIME + STILL MORE TIME + IBID + UNCONTROLLED EVOLUTION = LAND/SEA/AIR/NON-HUMAN LIVING CREATURES/SEVERAL BILLION HUMANS/THE GALAXIES IN PERFECT SPINNING ROTATING HARMONY/PIZZA (never forget pizza.)  Are you really buying into that?  Are you selling your brain that short? 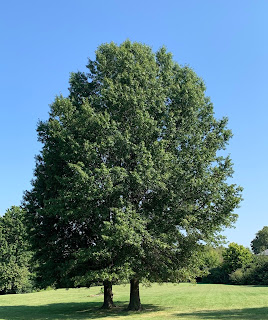 Just look at her.  Isn't she a beauty?  Do you know what that is?  That my friend, is a tree!  You know what is special about that tree?  That tree is special because she has over three TRILLION siblings on earth.  That's 3,000,000,000,000.  Hmm.  So maybe that means she is actually not special.  But think about this.  There are roughly 400 trees for every human being.  12,000 years ago, before modern agriculture, there were twice that many trees.  Yep, 6,000,000,000,000.  I am not making this stuff up.  I got this information from the source of all tree wisdom  ... "Scientific American." These guys aren't making it up either.  It took them 421,529 measurements from 50 countries on 6 continents to figure it out. (They have a lot of tape measures and yardsticks down at Scientific American.)  Hey... I believe them.  It really is true that when you cut a tree down and count its rings, there truly is a ring for every year the tree has lived.  How the heck did that happen? Who decided that 1 ring would equal one year?  And ... get this ... those rings can actually show biological conditions.  Things like drought, volcanic eruption, and such, can often be seen in the rings as well.  Trees live longer than any other organism on earth. Some trees can call for "back-up" against the insects that harm them. Say what?  Evidently it is true. Certain trees species have been shown to emit odors that attract predators that kill the insects that kill the trees.  Wouldn't you like to have such faithful friends?

There is more but I think you get the point.

It's Written On The Sky

Is there a God?  Somethings are just too obvious.  At least they are obvious in my mind … which probably is not saying all that much.  (There is a lot of room for clutter up there.) But stick with me.  I am creating this little site for my own pleasure, not for yours.  I mean, the world is a hard place.  I have to keep reminding myself that things are not running all amok.  Things are not out of control.  Things are not heading toward the unknown. I have to look at the evidence and not at today's newsfeed.  Can we agree that if someone is in charge we are MUCH better off than if everything is random and all crap really is running downhill?

So I am showing myself the evidence.  And I am taking all of the time I need to do so.  And I am  beginning right here.   I begin with a question and the question will refer to six  pictures that I took last week in my own neighborhood and in the parking lot of a local grocery store.

Here is the question … Is it more difficult to believe that the subject in these photo's just happened (the product of chance) or that they were created?  No presuppositions.  No discussion.  Certainly no preaching.  We all get to make our own call... 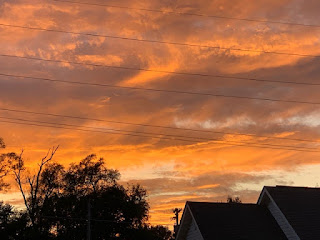 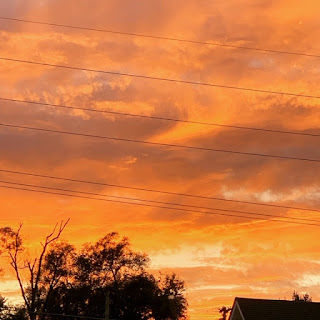 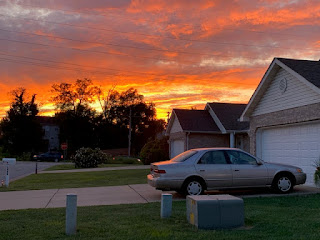 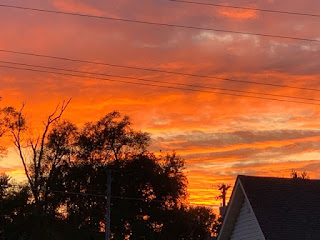 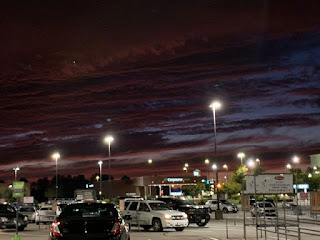 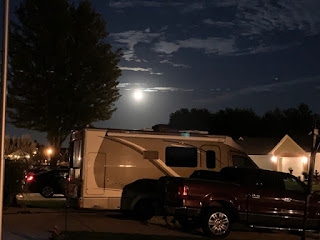 Undramatic?  Anticlimatic?  Probably because my laptop screen does not make available all of the colors and hues that were actually up there in those clouds.

Make your own decision.  But I"m putting a "check mark" in the "For God" column.

Ron
For ever since the world was created, people have seen the earth and sky. Through everything God made, they can clearly see his invisible qualities—his eternal power and divine nature. So they have no excuse for not knowing God. Romans 1:20